The concept behind Subnautica to gather raw materials to build bigger and more exciting things. This is more or less a standard in this genre of today. But the thing is that the world in Subnautica is so atmospheric, swimming in the depths and experiencing the darkness of a sunlit Mediterranean designs, while being replaced with very dark neon sparkling-designs underwater, is absolutely amazing . The strength of the game is the design that has been screwed with quite a bit. Certainly it has that Pixar-esque design with its own style, but the game still manages to find its own unique identity.

For Subnautica to be an beta-build with quite a little content, there is much to be found here. I have not encountered crashes or any bigger bugs. Unfortunately I haven’t been able to try the game on the highest settings; so maybe some problems will arise then. I chose between this game and another survival game named the Forest (which I intend to pick up later) and feel that there is huge potential, and I am already struck by the amount of things that exist in this magical world. I love games where it really feels like you’re entering a world, the concept, the story or the premise. There is actually a VR-version of Subnautica available as well. Exiting times indeed! 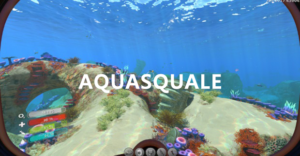 Many have already written pre-reviews on Subnautica, which to some extent also illustrates the empty market of games based on underwater exploration. Something we only have a few games circling around. Although this game have a Robinson Crusoe kind of premise, it proves that there is a lot of potential for other developers to explore. And I hope Subnautica continues to grow bigger and more contentious and eventually become a great experience when released fully.

Ever since pre-school, when I first played a game with an underwater theme, I have found that there is something very mysterious about this genre. That game was Ecco The Dolphin for the Sega Genesis, and it was more of a labyrinth where sharks and caves were found. Since then, a number of games have been created where the environment underwater has been a focus, ranging from U-boat-games to dive and shark-games. Because of my love of underwater-games, i’we had my eyes and  ears on this well-received Early Access game – for quite some time!